A story of mine, called ‘Adele’ is out now in the Blunderwoman anthology VINTAGE LOVE STORIES. It will be available in ebook and paperback soon, but for now it is available as an audiobook from https://www.audiobooks.co.uk/audiobook/vintage-love-stories/348868 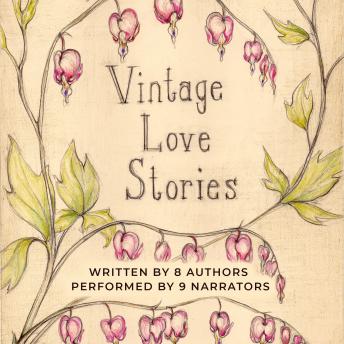 Here’s a snippet from ‘Adele’:

Grace looked at her left hand, at the gold band on her wedding finger. She tilted it in the dusty swirl of light from the window, the band shining as it caught the light at just the right angle. There was some sparkle left to it.
Grace looked away, to the blue sky beyond the window panes; the rooftops of houses the opposite side of the street forming sharp teeth against the blue, like terracotta mountain peaks.
Her sight grew bleary. She’d been trying to fight the tears back for days and for the most part, had managed admirably. But now they came in a deluge, pouring from her eyes, heavy raindrops that rolled down her cheeks and gathering in her lap.
If I cried long enough, she thought, I’d have a pool of water there. One hand over the other, like the hands of a garden sculpture built to capture rain for the birds. The decades would be but moments in time. Forty years of marriage—a life! —passing in a kaleidoscope of sunrise and sunset.

‘Uncommon Type’ isn’t ‘Dark Side Of The Moon,’ and that’s just fine. Very few albums are.

Albums like ‘Dark Side Of The Moon,’ that you can listen to from start to finish without skipping a single track, are few and far between. The same can be said for short story collections. ‘Uncommon Type’ by Tom Hanks was as surprising as it was wonderful, even if it was no ‘Dark Side Of The Moon’.

Hanks likes to say that when he first started out, his writing was lacking a voice. Well, there is no evidence of that here. His voice is strong, and unique, and his prose is thought-out and confident. He is best, I found, when exploring the inner workings of his characters. The young man in ‘Welcome To Mars’ who makes an unfortunate discovery; the single-mom of ‘A Month On Greene Street’ and her reluctance at embracing her new neighbour; a lost soul in need of a friend in New York, New York, in the story ‘Who’s Who’; the broken-yet-whole veterans of ‘Christmas Eve 1953,’ and the enigmatic yet distant mother of the boy in ‘A Special Weekend’. These stories are tender, and beautifully written, and I really felt that we were getting the real Hanks here.

Strangely, the story I didn’t connect with so much was the very story most reviewers claim is the standout of the entire collection. ‘Alan Bean Plus Four’ was entertaining, yes, but I could not connect with it at a deeper level, perhaps because I found the concept behind it so absurd. The same could be said for time-travel tale, ‘The Past Is Important To Us’. Another story I did not connect with was ‘A Junket In The City Of Lights’ as it seemed too on-the-nose, to be honest. We know Hanks is a famous actor, and this insight into what a press-tour can really be like was interesting, but obvious. It didn’t surprise the same way the others did, even though it was brilliantly written.

Of 17 stories in this collection, I found fault in just three of them. That ain’t half bad! In fact, ‘Uncommon Type’ is an exceptional collection of short fiction by a strong, fertile literary voice. I will be going back for second-helpings, and hoping that Hanks has caught the bug to write more. Because he really should.

‘Uncommon Type’ isn’t ‘Dark Side Of The Moon,’ and that’s just fine. Very few albums are.

Today I welcome author Dayton Ward here for a lengthy chat. Dayton is a prolific science-fiction and media tie-in author who has dabbled in Star Trek, 24, Planet of the Apes, The 4400, and other properties. Author Kevin Dilmore is a frequent collaborator (and partner in crime). Dayton is also a regular contributor to StarTrek.com, and has previously written content for Tor.com, Star Trek Magazine, and the blog Novel Spaces. You’ve probably read his Ten For Ward articles on StarTrek.com over the years. I know I have.

For a long time, I’ve wanted to interview Dayton Ward, and I finally got the chance. Dayton was kind enough to take the time out of his bust schedule to answer my questions, and I couldn’t be more thrilled.

Today I’m in discussion with Bernard Schaffer. I’ve known Bernard for a long time, and we’ve collaborated with each other, and edited each other’s work for years. Not only is Bernard an author, he is a full-time police detective, and father of two kids.

A career spanning twenty years has seen him become a decorated criminal investigator, narcotics expert and child forensic interviewer. Since I have known him, Bernard has been a formidable champion of independent publishing. His experience working the suburbs of Philadelphia, PA is present in much of his work.

It’s that real-life experience that makes his novel, The Thief Of All Light, so vivid and realistic (it’s released by Kensington Publications in Summer 2018). I was fortunate enough to be a beta (and early editor) on that book, and can tell you that it’s no surprise to me that Kensington wanted to publish it. Not only that, but they signed Bernard for a sequel, too. I’ve always been a fan of his work, but The Thief Of All Light is truly his best yet.

Here again to go another round is Bernard Schaffer!

Just click this link to read my interview him, where we discuss his novel The Thief Of All Light; the craft of writing; and much, much more!

I recently had the pleasure of chatting with author Harry Hunsicker! I met Harry briefly last year in LA, while we were both filming our Kindle Most Wanted segments. Harry is the former executive vice-president of the Mystery Writers of America. His work has been short-listed for both the Shamus and Thriller Awards and his story “West of Nowhere,” was selected for inclusion in The Best American Mystery Stories 2011. His latest novel is THE DEVIL’S COUNTRY, and it’s one helluva book.

My latest interview is now LIVE! My guest this time around is Harry Hunsicker.