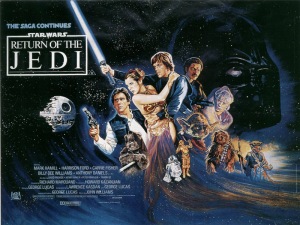 And so we come to Return of the Jedi. It opens with Vader inspecting the new Death Star, and announcing the impending arrival of the Emperor himself. This will be the first time we have met Palpatine in the flesh. Then we go to Tatooine (the films going full circle, returning to the homeworld of the first film) where Luke springs a rescue for Han, thawing him from his Carbonite prison. Luke then heads for Dagobah once again, whilst Han and Leia rejoin with the rest of the rebellion.

Luke asks a dying Yoda whether Vader was telling the truth or not. Yoda confirms it, and drops another little bombshell which the ghost of Kenobi later confirms: Leia is his sister. They were born twins.

Kenobi reveals to Luke how he tried to train Anakin in the ways of the Force, and failed in the process. Anakin turned to the dark side, and in so doing took the rest of the Galaxy with him. He warns Luke of following in his Father’s footsteps.

“Your insight serves you well. Bury your feelings deep down, Luke. They do you credit, but they could be made to serve the Emperor,” he tells Luke.

Whereas A New Hope started things off, and set-out so much of the mythology for the films, and Empire created a deeper study of the main characters and their private and cosmic dilemma’s, Return of the Jedi is about endings and retribution. In Empire, Vader offered Luke the chance of joining him and allying against the Emperor. In Jedi, Vader appears to be consigned to the fact that he will never be anything but the Emperor’s servant. There is the reversal of Luke asking Vader to join HIM this time, to turn back to the light. But Vader has existed in the shadows far too long. “It’s took late for me, my son,” he says before leading Luke to the Emperor.

Everyone hates the Ewoks, and the battle on Endor, and in a way I agree. The whole Endor sequence is quite unnecessary. Surely the rebellion could have de-activated the shield surrounding the Death Star without the help of 2-foot teddy bears. But then, even though the concept is silly, you have to respect Lucas’s balls for sticking to his guns and putting that in there. Either that or the guy truly is a little nutty. Or… he just wanted to sell Star Wars Teddy Bears…. I think that the film would have been stronger, had Leia and Han been involved in the space battle. I understand that the battle on Endor’s surface is really a way of giving them something to do – because really the end of the film focuses on Luke and Vader.

The ending of Return of the Jedi is the real highlight of the film, with Son facing off against Father, under the deathly gaze and influence of the evil Emperor. Luke turns for a moment – only a moment – and nearly kills Vader. Then he comes to his senses and throws his weapon down, defying the Emperor. To kill Vader and join Palpatine is what he wants. Palpatine turns on Luke, crippling him with force lightning, as Vader rises to stand by his side. In a moment of decision, Vader looks silently from one to the other. He looks at the Emperor, his Master, killing his Son and acts. Lifting the Emperor up, he throws him down a shaft and then collapses in his son’s arms.

As the Death Star is rocked by the space battle going on outside, Luke drags Vader to a shuttle to make their escape before the Death Star blows. Vader won’t last much longer and asks Luke to remove his helmet so that he can look at him with own eyes. He tells him he was right about him. It seems that, after all, Luke asking Vader to join him had touched him. When he’s said “I feel the good in you” he had been right. Vader had been in denial of the small flickering light of goodness that still existed within his chest, fanned and made whole again by the love of a son.

Vader dies in Luke’s arms and Luke takes his body to Endor, where he burns it (in what we will see in Episode I) in the Jedi tradition of cremation. The only problem with the ending is the scenes showing the celebrations taking place around the Galaxy at the Empire’s defeat. The Empire would not have been vanquished so suddenly, there would no doubt be fighting continuing on for many years to come, between those holding onto yesterday, and those reaching for tomorrow. But for the purpose of Star Wars, and in wrapping things up nicely, Lucas shows it as ENDED and we accept it.

Vader is dead, and Luke is finally a man – and after confronting the dark side and remaining true against it – a GOOD man. Han and Leia are together, even C3PO and R2 are still in one piece. The galaxy is as it should be. The hero’s gaze across at the ghostly apparitions of Ben Kenobi, Yoda and Anakin.

In a galaxy far, far away… there is a happy ending. 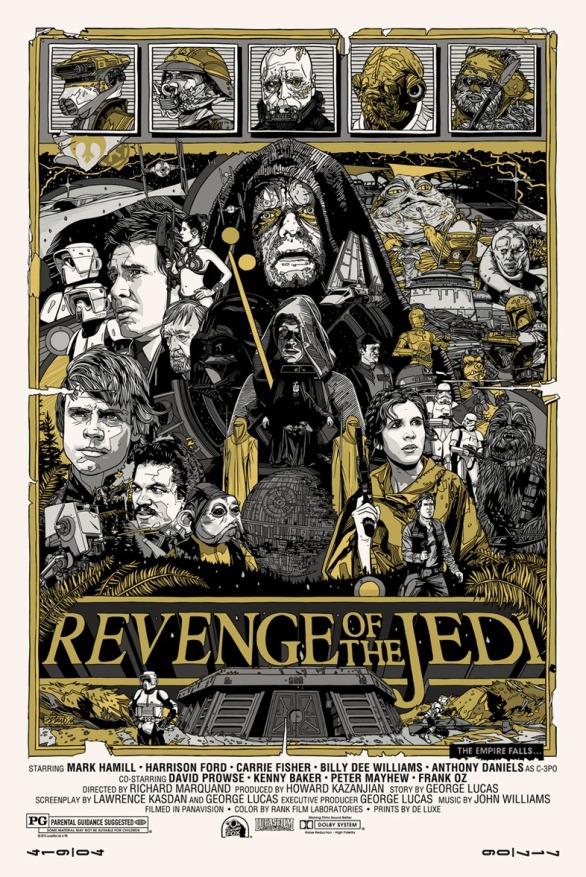