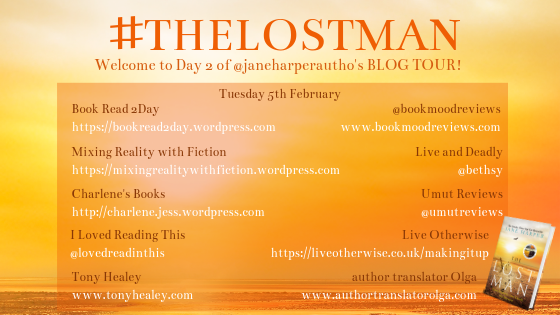 I was invited to read an ARC of Jane Harper’s THE LOST MAN, in return for an honest review. I enjoy doing these sometimes–and when it comes to reading Mrs Harper’s work, I always jump at the chance.

Readers of THE DRY and FORCE OF NATURE will not be disappointed with THE LOST MAN, which may just be the best book Jane Harper has written so far.

As ever, she does a brilliant job of transporting you from the cold, wet dreary UK and dropping you into the extreme heat of the outback. She deftly handles the characters, and while the novel has a slow start, it’s for a purpose. Here is a writer who values character over all else, and she’s right to do so. If they’re not real to the reader, then the book falls at the first hurdle. But get the characters alive and kicking, as Jane Harper does time and time again, and you’re off to a great start.

Soon you are swept away by the plot, and the twists and turns, and every sleight of hand is made all the more powerful and fulfilling because Mrs Harper has made her characters literally leap off the page.

A brilliant novel, from a brilliant writer. Awesome!