Coming out on October 27th, Age of Destiny, the first book in my new series The Broken Stars is now available for advance pre-order!  This means that you can click order now, and you’re guaranteed to have it sitting on your kindle on the 27th of October.

Note that the page count listed by Amazon is not a true reflection of the book’s length – it’s not finished yet. But in order to use the pre-order service, you have to provide them with at least a rough draft to start off with. I upload the finished book on the 16th, in time for Amazon to ensure it reaches everyone who has pre-ordered it. The Broken Stars is set in the same fictional universe as Far From Home, though set decades later, and featuring none of the Far From Home characters. But eagle-eyed readers will spot the references to Far From Home (and other things!) I’ve put in there, so look out for them.

Mostly featuring a cast of younger characters, I promise a rollicking good adventure yarn that will keep you on the edge of your seat! 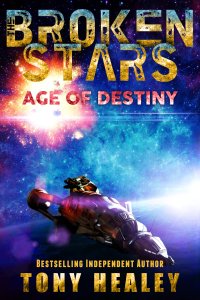