Today we took the kids out to the Sealife Centre (or Brighton Aquarium). It’s the oldest operating aquarium in the world believe it or not, and when I was a kid it had dolphins and sea-lions. Alas it only has fish now. I wish I knew exactly what happened to those dolphins. Not a lot of people remember them being there, which in the past made me question if I had really seen them.

The history of the aquarium:

“Brighton Aquarium was conceived and designed by Eugenius Birch, the architect responsible for the West Pier. Work began in 1869 and the building opened in 1872. The project cost £133,000 (equivalent to around £5.5million by 2001 standards). The Aquarium proved an initial success with the town’s fashionable visitors. In addition to the marine life on display, a number of other attractions were available. These included a conservatory, a reading room, and a roller-skating rink on the roof terrace. This success proved short-lived, however. In 1901 financial difficulties forced the sale of the Aquarium to the Brighton Corporation. Although matters improved, the Corporation decided to extensively modernise the building in 1927. This reconstruction work led to the alteration of much of Birch’s original design.

In the years following this redevelopment, the Aquarium has hosted a number of attractions. These have included nightclubs, cinemas and a motor museum. Brighton Aquarium is now a Sea Life Centre.”

A link to the dolphins that were held there when  I was a kid http://www.marineanimalwelfare.com/Dolphinaria/Web%20Pages/Brighton%20Aquarium.htm

After that we took them on the Brighton Wheel, which goes as high as 50 metres. You get fantastic views, and are guaranteed at least 3 revolutions. We got 5. Admittedly with the gales rushing right off of the sea, our pod was shaking to and fro and it got a bit hairy at one point. I’m  not awfully good with heights, and I had visions of the pod flying off with us in it. 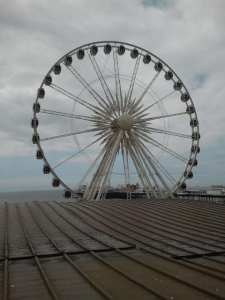 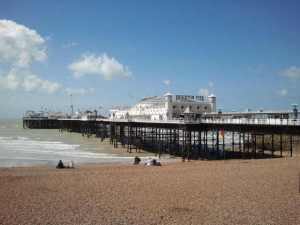 The pier from ground level as we approached the Wheel 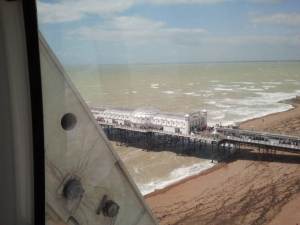 And from fifty metres up!

Below are a few more snaps from the pod 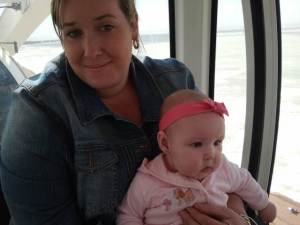 The wife and Olivia 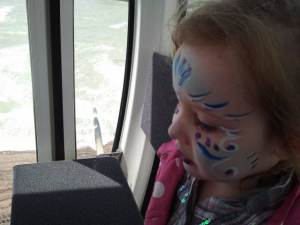 Leah with her face painted 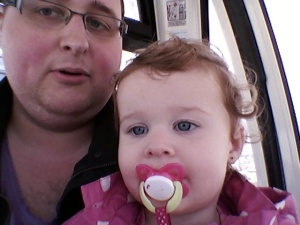 Me and Freya. Note my abundance of chins. As soon as I hit the big time, I’m having all that sucked out.

All in all a good day. Grabbed a bit of lunch afterward, the weather stayed good. Nice.