“One glimmer of life came into his face for an instant, and he uttered two or three words with an eager air of warning. They were slurred and indistinct, but to my ear the last of them, which burst in a shriek from his lips, were ‘the Lion’s Mane.'” – Sherlock Holmes and The Adventure of The Lion’s Mane.

If you read Sherlock Holmes, specifically the original Conan Doyle stories, you may be familiar with The Adventure of The Lion’s Mane. The title does not refer to an actual lion’s mane, however, but the biggest jellyfish in the world.

Whilst in the story, the lion’s mane jellyfish is the cause of death – as Holmes is able to ascertain following his investigation – in real life the lion’s mane is not nearly so dangerous.

A sting from the lion’s mane jellyfish causes an itchy rash and burning sensation. The rash can be painful for sensitive individuals and the toxins in the venom may cause an allergic reaction, but not life threatening. 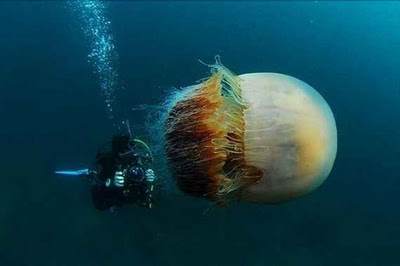 They live in the harshest weather conditions. Found in the freezing waters of the Arctic Ocean and Northern Pacific Ocean during the coldest months of the year, they are not found in the southern hemisphere at all.

So whilst they are the biggest creature in the oceans, they are not the deadliest. Even though Sherlock Holmes states “I am an omnivorous reader with a strangely retentive memory for trifles,” he was wrong on that one.