Creme Brulee is a fantastic story, and I don’t want to give away the details before anyone has read it.

Let us say it has enough twists and turns (especially at the end!) to ensure you are fully entertained throughout. When you learn one of the
male character’s secret identities, it all makes sense. Again, I don’t want to write a spoiler-ific review of this particular story.

To The Last Bite, is a classic tale of revenge enacted on a critic – surely the dream of many a writer, actor, chef… Brooks does it in such a way that you don’t see it coming, and are as surprised by the critic himself. You feel sorry for the critic as he realizes he is being made to pay for his past actions, and Brooks manages to at the same time get you to sympathise with the critic’s killer as victim himself. I felt that with this particular story, Brooks writing style was reminiscent of Roald Dahl – reminding me of that Dahl story where the wife killed her husband with a frozen lamb leg, clubbing him to death with it, and then cooking the lamb leg for the police and letting them eat it.

In Shashlyk and Morozhenoe, we hook up with the main character of Pandora’s Succession; agent Ridley Fox.

Again, I don’t want to give this one away. It’s sort of hard to write a review of the first and third stories without giving the plots away and spoiling them for readers. They really do twist and turn, in very few pages, and I don’t want to ruin them for you.

Brooks certainly has a gift for packing a punch in confined spaces – the writer equivilant of Ridley Fox himself – it makes you wonder if Brooks is more like his creation Fox than even he realises! You can imagine Fox fighting three men at once with his hands tied behind his back… which is how Brook’s writing leaves you feeling. I’d like to see Brooks handle something in the sci-fi genre one day. I feel he would deliver a highly detailed, yet fast paced novel that would blow your socks off. Perhaps one day he will…

Brooks sent me Unsavory Delicacies for review and I uploaded it directly to my Kindle device. I sat in bed and read it in one sitting. It is, after all, three short stories. But it is also impossible to put down once you start… and when you reach the end of the third story you wish it hadn’t ended. 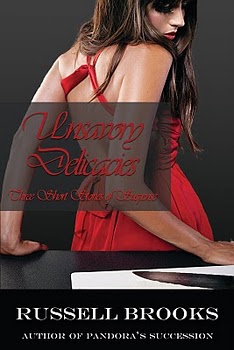 You can buy Unsavory Delicacies from Amazon.co.uk HERE

You can buy Unsavory Delicacies from Amazon.com HERE

You will also find Unsavory Delicacies on Smashwords, in multiple formats by clicking HERE