As we look toward moons like Titan for our next deep space mission, I ask the question again: Why not Europa? Of all of the planetary bodies in our solar system, it is the most likely place to look for life. So why are we not heading there?

It is thought that if life is there, it will have thrived from the gravitational tidal flexing that the moon experiences when it orbits around Jupiter, which we think warms the liquid water beneath the surface. We also suspect that something very much like the hydrothermal vents we have on Earth.

It is very likely that should we find hydrothermal vents similar to those we have on Earth, we will find life thriving around it. 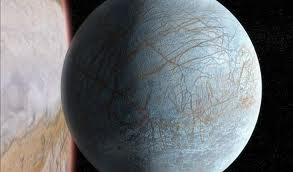 Hydrothermal vents form along mid-ocean ridges, in places where the sea floor moves apart very slowly (6 to 18 cm per year) as magma wells up from below. (This is the engine that drives Earth’s tectonic plates apart, moving continents and causing volcanic eruptions and earthquakes.)

When cold ocean water seeps through cracks in the sea floor to hot spots below, hydrothermal vents belch a mineral-rich broth of scalding water. Sometimes, in very hot vents, the emerging fluid turns black — creating a “black smoker” — because dissolved sulfides of metals (iron, copper, and several heavy metals) instantaneously precipitate out of solution when they mix with the cold surrounding seawater.

Unlike plants that rely on sunlight, bacteria living in and around the dark vents extract their energy from hydrogen sulfide (HS) and other molecules that billow out of the seafloor. Just like plants, the bacteria use their energy to build sugars out of carbon dioxide and water. Sugars then provide fuel and raw material for the rest of the microbe’s activities.

From James Cameron’s ‘Aliens of the Deep’: