Like many people, the only place I’ve ever heard mention of buckminsterfullerene is in an Arthur C Clarke novel, where he posited that it could be used in the construction of vast towers reaching up from the surface of the Earth, stretching out into space.

Buckminsterfullerene, or C60, discovered about 25 years ago, has some exciting potential uses, as a conductor, a medical aid, and as a construction material.

The total absence of electrical resistance in C60 molecules means that they should be the perfect method of conducting electricity without massive power loss. However, until a way of refining buckminsterfullerene is found that will enable it to handle larger currents, and conduct electricity at warmer temperatures, it remains an infeasible means of power transfer, hence why it has not yet been adopted.

The most promising use of C60, perhaps in realistic terms for present day uses, is in the treatment of cancers. Tests have shown that where C60 is present in a patient’s blood around a tumour, and light is shone on that tumour, the C60 causes toxic O2 to be formed, which attacks the cancer without harming other parts of the body. This method is currently under heavy research, but obviously a treatment for such a tragic disease that does not require drugs would be what it appears to be: a miracle. In effect you’d be using carbon molecules and light to ‘cure cancer’ – surely a dream for modern medicine, along with an effective response to HIV.

As (Saint) Clarke theorised, C60 could well be used for engineering purposes, but perhaps for the time being we will be confined to developing it for much smaller uses. In his novel 3001 he envisioned a future, a thousand years ahead where we’d built towers reaching up into Earth orbit, connected to a ring encircling the entire planet. He suggested that the material that might be used for such an epic construction may well be buckminsterfullerene.

With today’s technology they could be used in bicycle frames, fishing rods, and engineered at the nano-tube level for use in microchips. 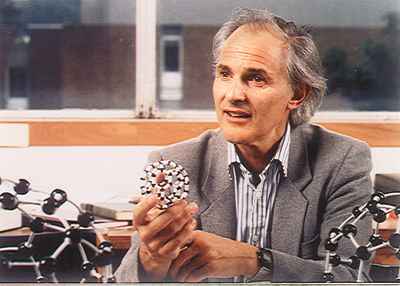 The two universities for my home-town, Brighton & Hove, are Brighton University and the University of Sussex. In 1985 Harold Kroto from the University of Sussex started working in conjunction with a team from Rice University, Houston, USA, to look into ways that large carbon chains might form in the outer atmospheres of stars. After years of research they managed to crack it, and discovered the element C60.
They; the teams from both Universities, would go on to win a joint nobel prize in chemistry in 1996 for their work. That’s quite a claim to fame, if the potential uses of buckminsterfullerene are fulfilled.

A potential cure for cancer, and perhaps in a few centuries time, a building material for skyscrapers that live up to their namesake and actually touch the very sky itself.

To read more about the discovery of buckminsterfullerene, please click HERE (Please be aware this is a PDF and not a webpage)

Nobel Prize in Chemistry for the discovery of C60 HERE

From an article run by the Mirror last year, the following list of 10 things you need to know about the C60 ‘buckyball’:

Here are the top ten things you need to know about everybody’s favourite chemical compound that resembles a geodesic dome.

1) We’re not on entirely familiar terms, so let’s address the buckyball with the formality such a big occasion deserves: as the first fullerene to be discovered, it is formally known as Buckminsterfullerene (C60).

2) The name is an homage to Richard Buckminster Fuller, an architect whose geodesic domes (similar to the Walt Disney resort’s Epcot theme park ‘golf ball’) it looks like.

3) It was first prepared in 1985 by Harold Kroto, James Heath, Sean O’Brien, Robert Curl and Richard Smalley at Rice University in Houston, Texas. Kroto, Curl and Smalley were awarded the 1996 Nobel Prize in Chemistry for their roles in the discovery of the buckyball.

4) Containing 60 carbon atoms arranged to form a hollow sphere (a truncated (T = 3) icosahedron), the buckyball’s structure is often compared to a football.

6) Fullerenes occur in nature only very rarely – although the C60 is found in soot.

7) Buckyballs have been utilised in research for electronics and nanotechnology.

8 ) In the PC game Civilization: Call to Power, one of the scientific advancements available is a city-encompassing force field of C60 buckyballs.

9) In Arthur C. Clarke’s novel 3001: The Final Odyssey, BuckminsterFullerene is the substance used to build the massive station-ring around earth and the necessary surface supports to maintain it.

10) The buckyball is the state molecule of Texas.